This circular tour follows the trail of history starting from Warmbad-Villach and heading to the Gail Valley. The “local mountain” of Villach, the Dobratsch, with Carinthia’s first nature park, and the Schütt region will accompany you for part of the trail towards Feistritz an der Gail.
moderate
Distance 19.9 km
Duration6:15 h
Ascent222 m
Descent157 m
From the Kärnten Therme in Warmbad, which was newly opened in 2012, the trail follows the Römerweg (Roman Way) to Federaun and from there goes along the River Gail towards Feistritz an der Gail. In Warmbad you will come across remnants of times long gone by. Many cultures have left their traces here, from the Romans to the French. The remains of the Roman roads in this area are particularly impressive. Hikers interested in history are recommended to make a detour in Federaun to the ruined Federaun Castle, a former Bamberg fortification.

The first half of this stretch is characterised by the distinctive local mountain of Villach, the Dobratsch, whose Rote Wand rock face bears witness to the large rockfall in 1348. In this region you very often come across rocky remnants of this rockfall, which are scattered throughout almost the entire valley area. The Dobratsch is now a nature park and is home to many plant and animal species.

The trail heads through the “Schütt”, a nature conservation area, and follows the River Gail ever further into the beautiful Gail Valley, which is particularly charming due to the contrast between the flat, wide valley floor and the sometimes rugged mountain slopes.

Feistritz is known for its church festival day on Whit Monday. Following Mass in the church and the traditional midday meal with the special festival day soup, first in Oberfeistritz and then in the Unterfeistritz the well known ceremony of “ Kufenstechen ” takes place, when young men dressed in the costume of the Gail Valley and riding on unsaddled horses strike a wooden barrel with iron clubs as they ride past, which is also accompanied by dancing in national costume.

We start our tour at the new Kärnten Therme in Warmbad and follow the main road for around 100 metres, and then turn off left. We follow the path behind the Hotel Warmbaderhof and continue towards the Römerweg (Roman Way). Our route takes us south-westwards past the Napoleonwiese meadow and around the Graschelitzen until we come to Oberfederaun. We turn left when we reach the Schütter Straße and follow this road until we have come through a small wood. Then a farm track leads to the right – we follow this leaving the motorway on our left. We go around the “Schütt” in an arc and follow the trail until we come to the village of Oberschütt. From here the trail continues along the Schütter Straße, on which after a short wooded stretch we once again come to the River Gail. From now on we follow the course of the river westwards until we reach the Almgasthof Schütt inn. After around 2 kilometres on the Schleusenweg trail we come to a stretch of the Gail Valley railway, which we accompany for a short way. Via the smaller villages of Förk and Saak we come to Nötsch, with its attractive Wasserleonburg Castle. In Nötsch we turn off left and cross the railway tracks. From here it is only around 600 metres to the bridge over the Gail, after which keeping straight on we come to our destination of Feistritz an der Gail. 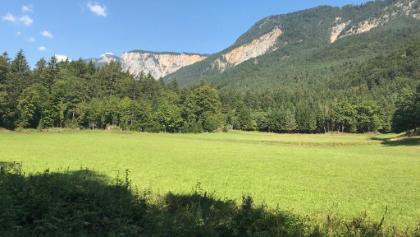