This circular tour is characterised by an impressive mountain backdrop: The hike, which crosses the national border, takes you into the eastern Carnic Alps on the Carinthian side, and onto the Feistritzer Alm at the foot of the distinctive Osternig. In Italy the trail leads from the Achomitzer Alm down into the valley to the village of Camporosso, and on to Valbruna.
difficult
23.7 km
7:30 h
1,314 m
1,071 m

Feistritz im Gailtal is known above all for its annual “Kufenstechen” festival on Whit Monday. On this day the Gail Valley local costume is worn by the unmarried boys and girls who are over the age of 15. Following Mass in the church and the traditional midday meal with the special festival day soup, in the afternoon first in Oberfeistritz and then in Unterfeistritz the young men of the village dress in the costume of the Gail Valley and ride on unsaddled horses to strike a wooden barrel with iron clubs as they go past, which is followed by dancing. The following day the married people of the village go to Mass in the church dressed in their adult costume, and meet in different houses for drinks and for dancing.

Camporosso (in German Saifnitz) with the Fella and the Canal del Ferro/Eisental Valley on the one side and the Val Canale/Kanaltal Valley on the other side lies precisely on the watershed between the Adriatic and the Black Sea. The Saiseratal Valley, which is set against a striking mountain backdrop, including the famous Wischberg and Montasch peaks, is probably one of the most fascinating valleys in the Julian Alps. Many forest roads and trails branch off the asphalt road which leads from Valbruna to the excursion destination Oitzinger-Wiesen (mountain lodge with food and drink, and riding facilities), with an open invitation to many beautiful hikes.

We follow the forest road up westwards from Feistritz an der Gail (altitude of 560 m) towards Monte Osternig on the northern slope of the wooded crest of the Omberg.

At a crossroads, at 1477 m, we leave the road to the right that leads directly to the Werbutz Alm and, staying left, we cross the eastern crest of Monte Osternig.

Still following the forest road (trail 481) we reach the Feistrizen Alm, at 1720 m, a group of typical mountain pastures at the foot of the southern side of Monte Osternig.

From here we take the direction of the southern border line (CAI trail 403-507) and, after reaching the chapel of the Madonna della Neve, we descend to Sella Pleccia, at 1616 m. From there we start climbing again along a dirt road to the Achomitzeralm and the Schönwipfel mountain hut/hostel (rifugio) at an altitude of 1712 m. We take then the CAI trail 508 that crosses the western side of Monte Acomizza, then goes slightly east of the wooded summit of Cima Muli, and descends in a southerly direction in sharp bends as far as the forest hut of Cima Muli, at 1495 m. From the forest hut, following a steep cart track in the woods (still CAI trail 508) we descend in the direction of Camporosso.

Arriving at a crossroads a little above the town, we turn right onto the forest road with a CAI trail 506 marking and, after a few dozen meters, we take a path downhill to the left to the houses of Camporosso, at 810 m. After reaching Via Valcanale, we follow this road towards the right for a short distance and then take a left towards the cross-country skiing school.

We cross the SS13 by an underpass and, just beyond, underneath the highway viaduct, we join the Alpe Adria cycle path.

Following cycle path to the right (towards Pontebba) for 1.5 km, we then cross the asphalt road which, leading leftwards for around 1.5 km, brings us to Valbruna at 810 m, our stage arrival point. 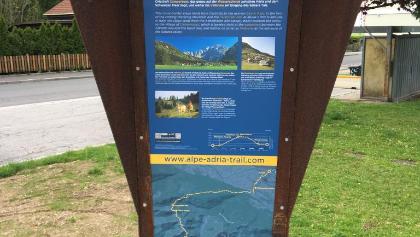 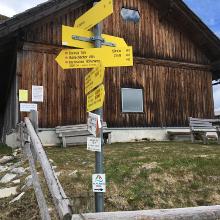 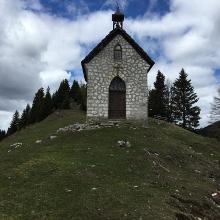 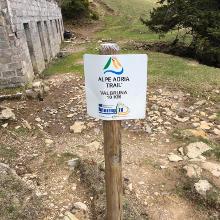