Explore the unspoiled natural landscape of the central area and the cultural landscape of the mountain farms in the outlying area. On this stage you will discover the two main elements of the Hohe Tauern National Park: gems of agricultural timber construction such as the Apriach group of mills and Mentlhof showcase farm, and glorious views of the Grossglockner and mighty Jungfernsprung waterfall.
easy
13.1 km
4:45 h
462 m
751 m

This stage leads along the western foot of the Goldberg group; gold was mined here in the Hohe Tauern for centuries. The sought after precious metal was washed from the streams in Roman times, and gold mining enjoyed its heyday in the 16th and 17th centuries. Some of the most productive mineshafts were in the grandiose Zirknitz high mountain valley, known as the “gold miners’ valley”, which we reach at the end of this one-day stage.

You can still follow the gold mining trail today: Amateur gold miners can try their luck in the “Old Gold Panning Plant”, which is easy to reach via a short detour. The gold miners’ village which was erected on the original models during the major regional exhibition “Kärnten wasser.reich” can also be visited, by taking a somewhat longer detour (around 1.5 hours there and back) or conveniently with the National Park Hikers’ Bus.

The highlight of the route is the mountain farmers’ village Apriach. More than almost any other building, the “Stockmühlen” mills (a wasser.reich destination) are a symbol of the mountain farming cultural landscape in the Hohe Tauern National Park region. These picturesque mills bear witness to the centuries-old tradition of cultivating cereals at altitudes of over 1.500 metres! In the immediate vicinity of the mills there is also the Mentlhof showcase farm (a wasser.reich destination). A visit, including sampling the farm’s own produce, is highly recommended during this hike.

From Apriach there is a wonderful view of the Jungfernsprung. At 130 metres, it is one of the highest waterfalls in the Hohe Tauern. The legend has it that a maidenly dairy farmer saved herself from the Devil, who was pursuing her, by plunging into the depths, and survived this leap almost unharmed …

The destination for this one-day stage is the town of Döllach in the municipality of Großkirchheim, an important gold mining centre which today houses the head office of the National Park administration.

The route starts right in the centre of Heiligenblut and for a short way leads along the main road and out of the valley. After a few minutes we branch left (opposite the multi-storey car park), and ascend partly on footpaths and partly on minor village roads until we reach the country road to Apriach close to the Fleißkehre (the 1st bend of the Grossglockner High Alpine Road). Here you can make a slight detour to visit the “Old Gold Panning Plant”.

After crossing the small and large Fleißbach streams, we leave the road again and take the hiking trail beneath the road to reach the Fleiß Chapel. We comfortably follow the footpath towards Apriach without any major ascents, and reach the road again, which we follow as far as the small hamlet of Unterschachnern. Here we keep left and via a roadway we come to Oberschachnern. From here we cross to the mountain farming village of Apriach without any differences in altitude worth mentioning, once more keeping to the left at a fork. From Apriach we enjoy wonderful views back to the Grossglockner as well as to the Jungfernsprung which is opposite us.

The famous Apriach “Stockmühlen” mills (the term “Stock” [= stick] derives from the wooden drive axle of the millstone) are probably the highlight of this stage and bear impressive witness to the former life of mountain farmers in the region. The route leads past the mills and down to the Apriach country road, which we cross and from where descending again we shortly reach the Mentlhof showcase farm. Here we have earned a rest!

We now follow the village paths for around 1 km towards the village of Mitten, but turn off the road again to the right before we come into the village and descend mainly through meadows, but briefly also through a section of woodland, until we reach the road once again on a bend. We are now very close to today’s destination Döllach and we could descend into the village within a short time via the road we have reached. However, we hike along the road a little further, and branch off at the next bend onto a hiking trail which leads us firstly downhill and then somewhat uphill until we are close to the Zirknitz Valley. Now, descending somewhat more steeply, we come straight into Döllach. 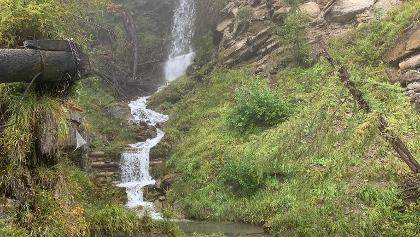 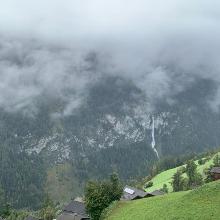 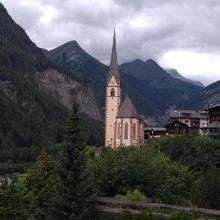 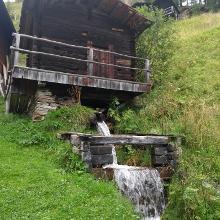