This stage from the Gerlitzen Alpe down to the cultural Ossiach runs through scented spruce and larch forests, with panoramic views of the surrounding mountain landscape and Lake Ossiacher See. Variety comes in the form of a waterfall trail, the Bleistätter Moor and attractive places such as Steindorf, Alt-Ossiach and Ossiach with the beautiful Ossiach Abbey, the venue for the “Carinthian Summer”.
moderate
16 km
5:45 h
178 m
1,581 m
This stage of the Alpe Adria Trail starts on the Gerlitzen Alpe, one of the most attractive and sunniest viewing mountains in Carinthia. In winter the Gerlitzen Alpe is a popular skiing region, but from spring to autumn it is the domain of hikers and Nordic walkers. The trail leads along the Gerlitzen Summit Trail towards Steindorf and snakes picturesquely through old larch and spruce forests, with repeated views of Lake Ossiacher See, the destination of today’s stage. Lake Ossiacher See is the third largest lake in Carinthia (10.5 km²) and is a striking, mystical green colour. The large variety of fish species also makes Lake Ossiacher See a paradise for fishermen. A special highlight of the route comes in the form of the waterfall trail, which leads past several waterfalls above Steindorf. Once you have reached the valley floor, the trail leads alongside the lake to the Bleistätter Moor, a former wetland which has now been drained, and through which the Tiebel, the main tributary of Lake Ossiacher See, flows. From here the route leads via the village of Alt-Ossiach right to Ossiach Abbey on the shore of Lake Ossiacher See. The abbey can look back on a lively history of almost 1,000 years, and today as the venue for the concerts of the “Carinthian Summer” it is a centre of high culture. If you want to shorten the route somewhat, you can also cross from Steindorf to Ossiach by boat.

Our starting point is close to the Feuerberg Mountain Resort, approximately 250 metres south of the car park. We set off on the Gerlitzen Summit Trail no. 4, which right from the start leads us along the north east ridge of the Gerlitzen on small footpaths through attractive spruce and larch forests. We can enjoy the view into the distance and the panoramic view of Lake Ossiacher See, which has accompanied us along the entire summit trail. After around 1.5 hours we reach the Wippenighöhe. From here we continue to follow the summit trail eastwards and after around 2 hours we reach Manessen, where we leave the Gerlitzen Summit Trail and follow trail no. 971. We now pass the Karawankenblick Hütte mountain lodge and follow a section of the access road, cross two small streams and at the next fork take the path signposted “Wasserfallweg Nr. 41”. We follow the course of the water into the valley and enjoy the rushing sound, the light playing on the surface and the freshness of the water. This section runs steeply down into the valley to Steindorf. Having arrived at the edge of the village, we head in the direction of the church, cross the main road and take the Dammweg trail along the eastern shore of the lake. On our left is the Bleistätter Moor, and on the right Lake Ossiacher See, whose shore here has been designated a nature conservation area. At the end of the Dammweg we cross the L 49 road and follow trail no. 1 along the edge of the village towards Alt-Ossiach. After approximately 2 km we again cross the L 49 and follow trail no. 1 towards the centre of Ossiach. We reach our destination, the garden in front of Ossiach Abbey by the Ossiach landing stage, after around 1.2 km. 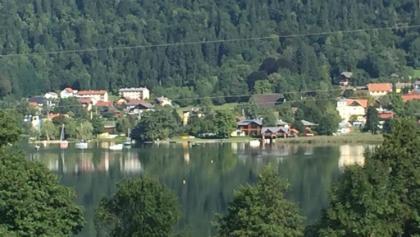 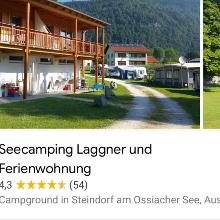 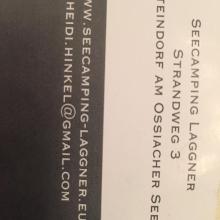 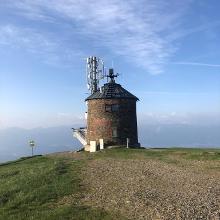