An impressive " short - distance trail " around the Nature Park Dobratsch .
moderate
68.1 km
20:45 h
1365 m
1357 m
The Dobratsch is an anomaly in many ways. It represents not only the largest landslide area in the Eastern Alps but also the habitat of rare plants and animals , it is also the center of gravity of the region's history , which is characterized by specific cultural wealth . Located at the intersection of three cultures surrounding by a lively indented valley landscape ,  which has developed this idiosyncratic character and a atmosphere which is best when hiking . The scale of Dobratsch Nature Park and Nature Park communities loop trails and connects so many different natural areas and cultural landscapes, that can hardly be more varied. Despite the small radius of less than ten kilometers, that constantly changes the picture . The wonderful nature civilization offers an exciting program of contrasts ; Encounter evidence of a history at every turn . Highlights of time travel are localities with important cultural monuments and historic houses stocks . There are also traces of contemporary art and delightful creations of everyday culture . Even the cuisine leaves little to be desired . All stage destinations are accessible by public transport ( three of them with the railway) , resulting in several variations and abbreviation possibilities. So the Dobratsch circular route meets all the requirements for a short distance walk that will remain in your memory.

The first Point : Hiking Route from Warmbad Villach to Bad Bleiberg base. The first point of the circular route leads from the periphery of the city into the quiet mountain slopes of Dobratsch and from there to the remote Bleiberger high valley . The hikers come not only to enjoy a nearly unbroken landscape , but at the same time gain a first insight into the rich cultural history of Villach's local mountain . At the first section hikers can expect several attractions, including two karst caves and the Tscheltschnigkogel with the remains of a late antique settlement . From here, follow an old mule track to the north side of the Dobratsch where the Hundsmarhof invites you to stop. In sunny Holy Spirit there is an open view of Villach . Further down you walk along a romantic White brook surrounded by a village of huts , the former mining village in the shadow of the mountain. Here , you enter a world of its own , which for centuries was dominated by the mining industry and its appeal relates not least from the distinctive architecture . Latest in Bad Bleiberg , the goal for the day , you will recognize their special nature and succumb to the austere charm of the area.  The second Point : Hikers from Bad Bleiberg to Notsch  On the second day you switch from the north side of the Dobratsch 's Lower Gail Valley, focus on the various landscapes .  The first section still dominated by the mining industry , one soon arrives in rural plains to finally descend into the shadowy Nötschgraben , where a  friendly destination is located .  The first highlight one experiences at the outset  follows spectacular tunnel trails, which were partly carved into the rock and fits wonderfully into the landscape. Handsome farms and lush meadows with views of the Dobratsch are offered around the Erlach ditch . Even a more magnificent panorama is at the Fischerhube , an abandoned mountain farm overlooking the Southern Alps. From here you stroll through the woods in a quiet valley , at the base you will be accompanied by a stream to Notsch . The worthy conclusive is the tour of the place , in which not only converts in the footsteps of Nötscher painter , but also get to know one of the most beautiful villages in the country.  Third Point : Hiking from Notsch to Arnold Stone. On the third day you leave the gravitational field of the Dobratsch behind and discover one cozy village after the another . Although you move almost exclusively in populated areas , one is always surrounded by a breathtaking landscape . First stop is Feistritzsattel iG , where you will be dedicated by a culture invitation to stop. The parish church rises like a picture book above the village . A romantic wooden bridge located on the way to Achomitz , and of a village square of the pristine region . There is a friendly presents in Göriach which has withdrawn to a hill and has attracted a further guesthouse . After a brief dry spell in the area of ​​federal roads, which leads again to rolling hills you can enjoy the views of the 1,600 m high Steilwänd of Dobratsch . A striking example is the powerful church  of High Thurn . In the last section , the idyll is replaced by the brittle charms of an old industrial town. A milestone is the landmarked shot tower in Gailitz , the extensively renovated monastery ruins of "Arnoldstone" - Last but not least - . The historical center  4th Stage : Hiking from Arnoldstein to Warmbad -Villach. On the last leg of the Dobratsch hiking Route the nature experience is not unclouded, because of its proximity to the Motorway, with the occasional traffic noise, experience comfort across the unique landscape of the landslide area, bulk and the wonderful conclusion to the Roman road at Warmbad Villach . Arnoldstein , it is not far to the beautifu block forest at the foot of the Dobratsch, where cows graze on the Gail and a guesthouse maintains a cozy service. White sand bank lines the river , polished rocks rise from the turquoise water . Two natural jewels await the hiker near the village Oberschütt . These are the marshy Gladiolenwiese and grazed meadow called Weinitzen , both strictly protected by very different flowers. In Federaun , reach comfortable shores where there are the enchanted castle ruins of the former importance of the place. Here the Roman road begins its special aura which  catches you immediately . This also applies to the Studenca , a karst spring , which -  poursand rushes out of the rock - in the appropriate season . No better place to adopt a four -day hike with a cool foot bath !

Villach -Warmbad is hourly accessible by S2 train of the ÖBB. 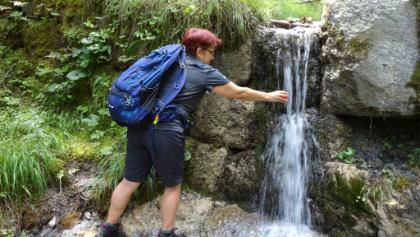