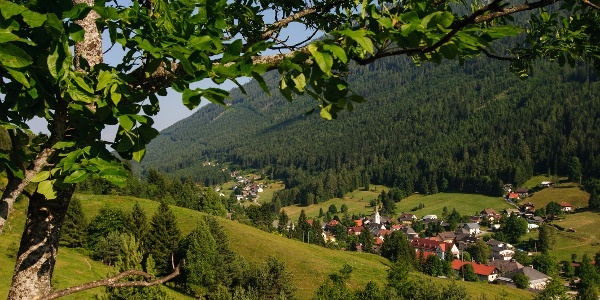 This tour is not signposted but it is easy to find your way.

The start of of this attractive tour around the mountain Dobratsch is in Villach-Lind. Cycle through the hamlets of St. Martin and Lower and Upper Fellach Neufellach onwards to Mittenwald, Heiligengeist and Bad Bleiberg. Take the road leading into the Bad Bleiberg valley between the Dobratsch and the Bleiberger Erzberg.After cycling through shady forests and past blooming meadows we arrive in the old mining town of Bad Bleiberg. From there it goes downhill to Nötsch and through the village towards the river Gail. We cross the bridge and turn immediately afterwards to the right to Feistritz. Follow the side road to Achomitz, Dreulach and Draschitz over an idyllic plateau. Continue towards Arnoldstein and cycle the last stage without further climbs quickly via Pöckau, Neuhaus, Unterschütt, Müllnern and Villach-Warmbad back to the starting point.
Arrival by train, car, foot or bike